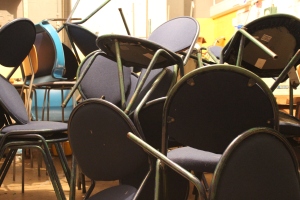 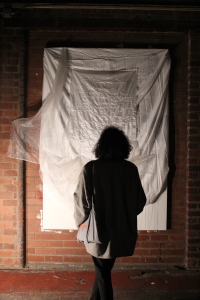 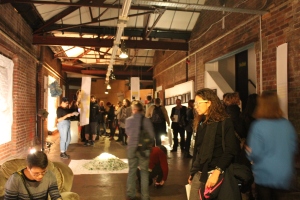 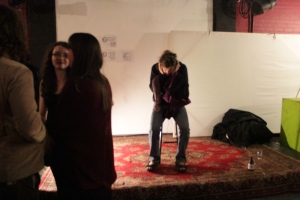 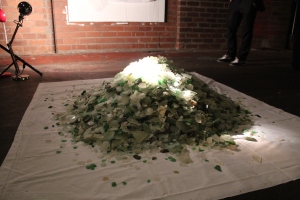 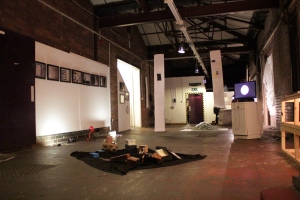 Yellow Wallpaper is the exploration of mental health positioned within the context of woman’s history, literature and personal experience. The event aimed to bring to light the issue of mental health, encourage conversations and stimulate awareness through creative expression. It promised a night of spoken word, music, film and performance all programmed alongside a more traditional visual art exhibition. Confessional written extracts were also installed amongst the visual art; with a publication of the same name made collaboratively with the University Fine Art department’s publishing house Unstapled Press.

In a wider sense, we intended for the exhibition event to stimulate the creation of a public forum where people could creatively engage with the issues of mental health today and share their own experiences. In doing this, we hoped to aid in the breaking down of stigma and encourage openness in the discussion and expression of these issues. On a personal level, throughout this project we challenged ourselves to do new things, gaining skills in areas such as advertising and promotion, curation, communication, budgeting and management. We hope to extend these new skills into further projects including exhibitions and workshops within the local community and beyond.

Yellow Wallpaper the exhibition took place on the night of the 11th of November at the Star and Shadow Cinema in Newcastle upon Tyne. The event involved an intensive programme of live performances alongside a more traditional visual art exhibition which also included the addition of textual installations from local writers. Star and Shadows foyer acted as the key exhibition space; with a range of visual practices including Stephen Hithersay’s domestic photographs, Sara and Carol Rejaie’s sea glass installation and Petra Szeman’s playful illustrative adventure scrolls gently inviting discussion and personal reflection. As mentioned, a range of texts such as blog posts from mental health nurse Claire Keys and confessional prose by Rachel Gill were hung and suspended from ceilings throughout the exhibition site in order for them to have as much of a visual presence to that of the artworks on show.

It was important to us that the bar area was purposefully removed from the main exhibition site. This was in order to provide a place for visitors to relax and socialise away from the sensitive and at times difficult subject matters exhibited. The bar area became a place of discussion, with the publications on offer for free and written text concerned with the obsessive nature of eating disorders by writer Andrew Jones, also providing stimulus. A programme of live performance occurred in the cinema room throughout the event. Local writer Lauren Veveers provided a comical yet sensitive spoken word from one of her own works whilst musician Caoilfhionn Rose provided a beautiful set inspired by her own personal experiences.

The exhibition included twenty four artists and writers; amongst the works mentioned, films, sound pieces, performance art, installations and textile pieces were also included. Over two hundred visitors attended the event, suggesting that the issues brought to light by the work had a significance to personal, social and community interest. During the course of the evening, visitors were provoked into conversation about the issues on show particularly relating to the role of the home in supporting an individual’s experience with mental illness. The works invited self-reflection, as a result of its highly charged and personal nature, allowing for engagement with an issue that is usually socially stigmatised and or ignored. Therefore it could be argued that through this providence of an open space in which to discuss and personally reflect on mental health as seen through the history and experience of woman, a barrier was broken and a realm of discourse was created.

Here are two links to reviews written about Yellow Wallpaper. They provide evidence as to how the exhibition has had a social impact.

Through this project, we have gained experience in areas such as advertising and promotion, curation, communication, budgeting and management. For example we have had to use social forums in order to advertise and gain submissions for our event, communicate and attend meetings with local businesses, and provide both written and oral presentations to funders. We hope to extend these new skills into further projects including exhibitions and workshops within the local community and beyond.

We’d encourage any students who are considering applying to develop a project of their own to do so. The impact our exhibition had on the community through its encouragement of discussion and creative expression around the issues of mental health was extremely rewarding. It allowed us to see how we could further support and provide a means of engaging with an issue so often ignored.

As a result, we have now begun to develop further projects that we hope will have just as much if not more of an impact. The financial support provided by the Alumni Association Annual fund gave us the confidence to achieve and develop our ideas. Without them we would have never been able to put on an exhibition of such scale that reached so much of the community.